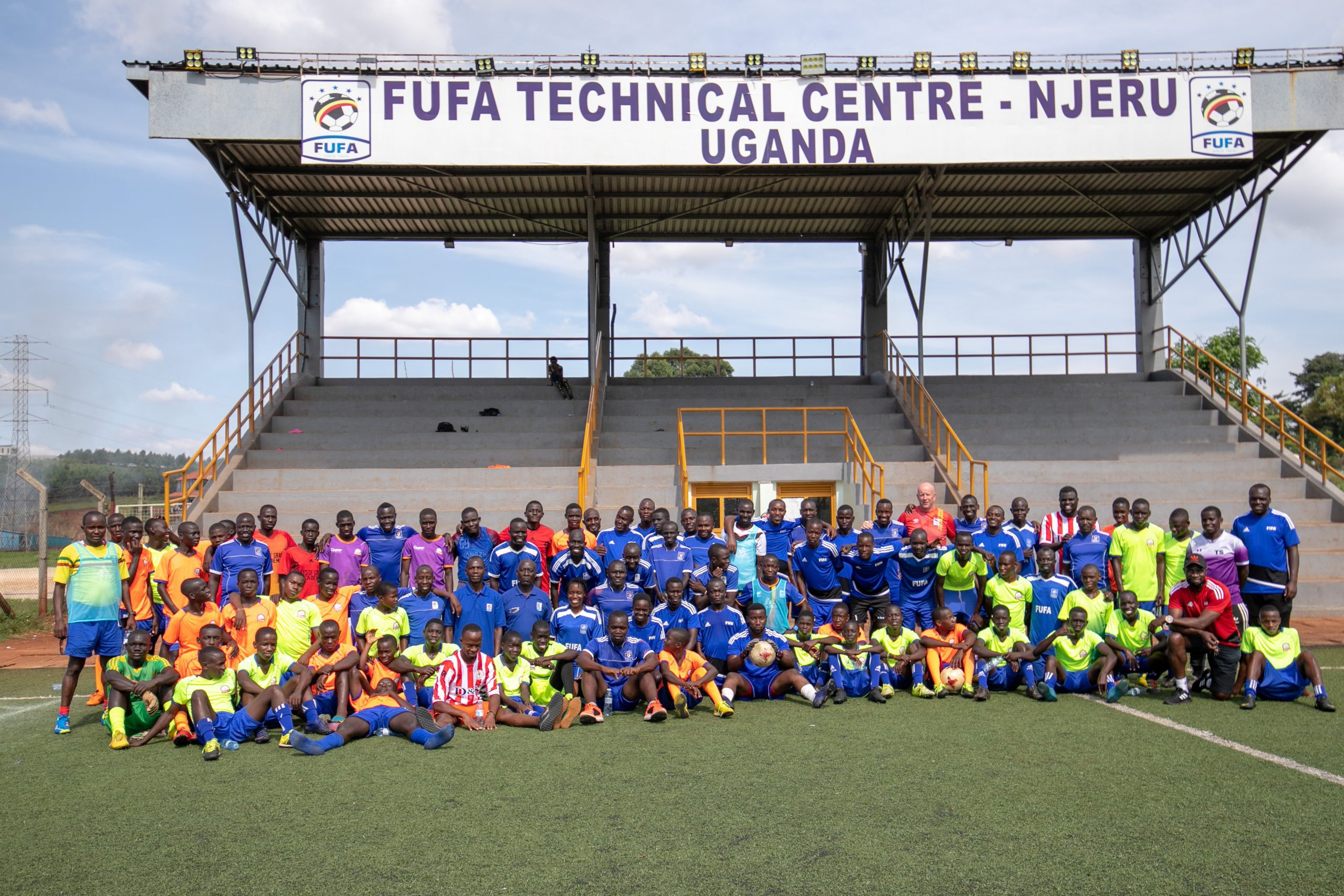 This month, in a collaboration with the Federation of Ugandan Football Associations (FUFA), Tunga has trained 40 youth football coaches in Uganda. You might wonder why and how an IT staffing company ventures into football.

It is our mission to unleash African (tech) talent. And we believe that football can be a great vehicle for young Africans to learn important life skills. Most players will not become an African Messi or Ronaldo. But engaging in sports will teach them skills that are valuable to any local or international employer.

“Playing is the language of children.” Those are the words of Stone Kyambadde, the chairman of the Ugandan Football Coaches Association. “Children don’t like to be in school, but while engaging in sports, they are very receptive to learning.”

This insight was the starting point of a collaboration between FUFA and Tunga. A football lover and youth coach, Tunga founder and CEO Ernesto Spruyt set out to design a training program for Ugandan youth coaches. The idea was to share best practices from the Netherlands, a country with a very advanced football youth development infrastructure and a reputation for grooming the best football talent. And additionally, to leverage Tunga’s experience in helping African talent to work successfully for international IT companies.

The result was a 5-day course at the beginning of October at the FUFA technical centre in Njeru, Uganda. FUFA had delegated 40 coaches from schools and football academies all over the country to participate. With theory sessions in the morning and field sessions in the afternoon, they followed an intensive program that gave many new insights into the technicalities of playing football and what it takes to educate youngsters.

“A child plays for the coach and his parents”

The program’s lead trainer was Kevin Kanu, a youth trainer at Sparta Rotterdam in the Netherlands. Kevin is a former youth player at Feyenoord, a UEFA-C certified youth coach at one of the most innovative youth academies in the Netherlands (in collaboration with Ajax) and holds a bachelor’s degree in pedagogy. Being brought up in the Netherlands by African parents, he almost seemed the perfect person to translate Dutch best practices in youth football development to an African context.

“A child up to eleven or twelve years old only plays for three people: the coach and the parents. So as a coach, you have an important influence on it,” Kevin said. He further highlights what is necessary to achieve this, “The key here is to create a positive and safe environment, in which the child can experience success.”

Although this may be clear to some, from experience, Kevin knows that this is not always so in African culture. Often the child is considered incapable of taking responsibility, and independence can easily be interpreted as disrespect. 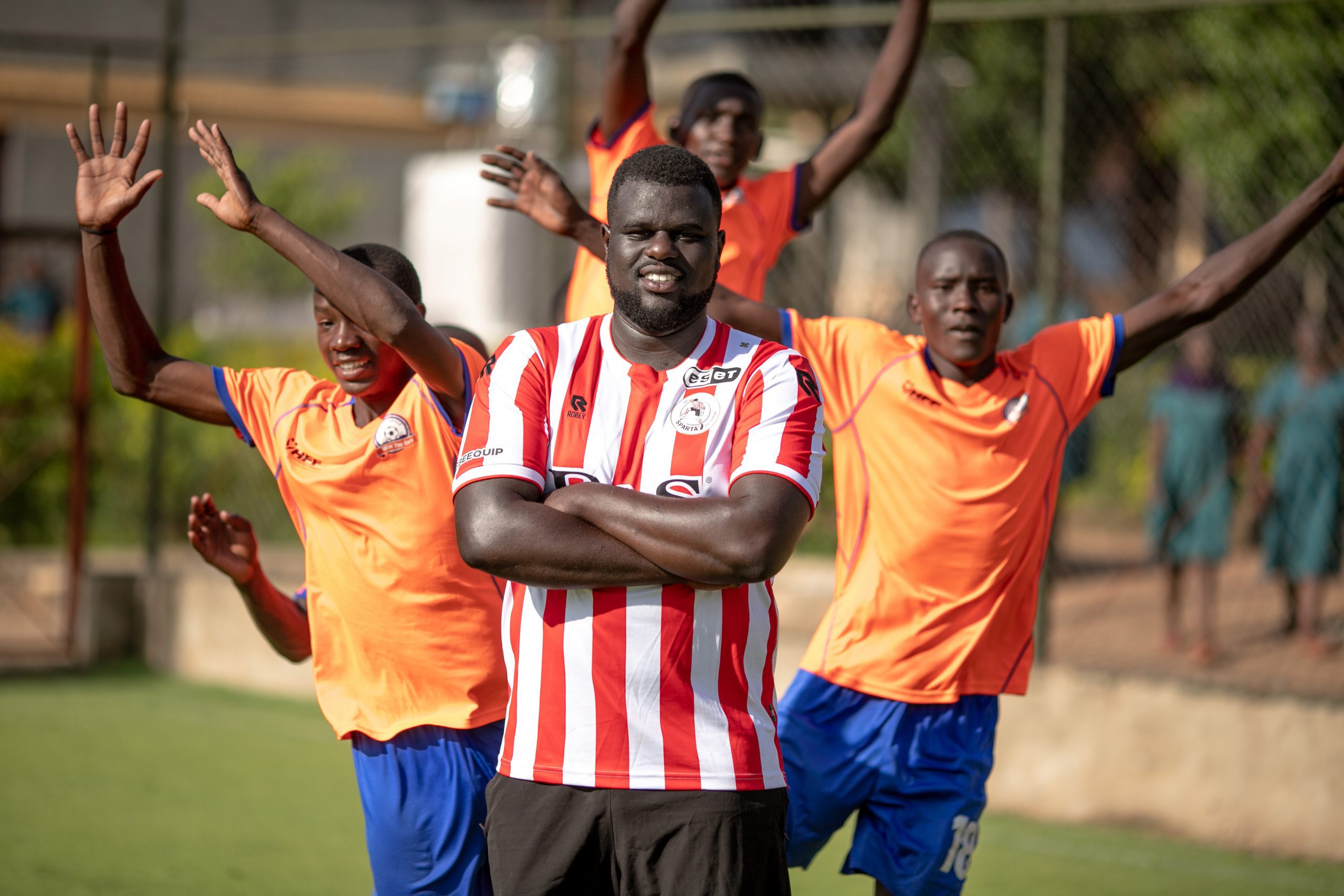 An interesting example of that took place on day three of the session. On a sunny afternoon, it was decided to play a match between the players and the coaches. After an intensive round of games, both teams in the finals played out a draw taking the game to penalties which the coaches won.

What was unique about this exercise was that Kevin noticed the players intentionally allowed their coaches to win the shootout out of respect. After much deliberation, the decision was to share feedback with the coaches in a session marshalled by Ernesto.

When asked why they didn’t allow the boys to win, the coaches responded in disbelief, “Why would we? We are competitive, and we want to teach the boys the importance of winning and being competitive.”

Then Ernesto countered: “If being competitive is so important, why did the players let YOU win?” At first, they insisted that this didn’t happen. Eventually, they admitted the reason behind the player’s decision was respect for the coaches.

“At this moment,” said Ernesto, “we tried to bring everything we spoke about into this particular session, and I asked: would you like them (the players) to respect you out of fear or to respect you based on merit?”

Why do many African players struggle in Europe?

Throughout the week, we got asked multiple times why there were no Ugandan players in Europe’s top leagues. Uganda has a population of 45 million, with 77% of its population being under the age of 25. With such a large talent pool, you’d expect at least some to break through.

Players from the nearby Rays of Grace football academy were part of the practical sessions. Based on what we saw during the training course, it certainly was not a lack of talent, technique or football know-how. We were highly impressed by the technical level of these talents. Also, during the training sessions, it was clear that many of the coaches had a high level of football knowledge and came up with advanced training exercises and coaching techniques.

However, we did feel that the educational culture was in the way. We noticed a lot of ‘joystick coaching’, a style of coaching in which the players are micromanaged by the coach. Overall, the conviction was that players need the coach to guide them, otherwise they are helpless. But when you take this approach, you will not teach them to become problem-solvers.

“Everyone has a plan until they get punched in the face.” A famous quote from Mike Tyson. Our takeaway was that for Ugandan players to thrive in Europe, they must be stimulated to take initiative and to operate independent of external supervision. They should be allowed to make mistakes and deal with setbacks themselves, so that they become problem-solvers on and off the pitch. 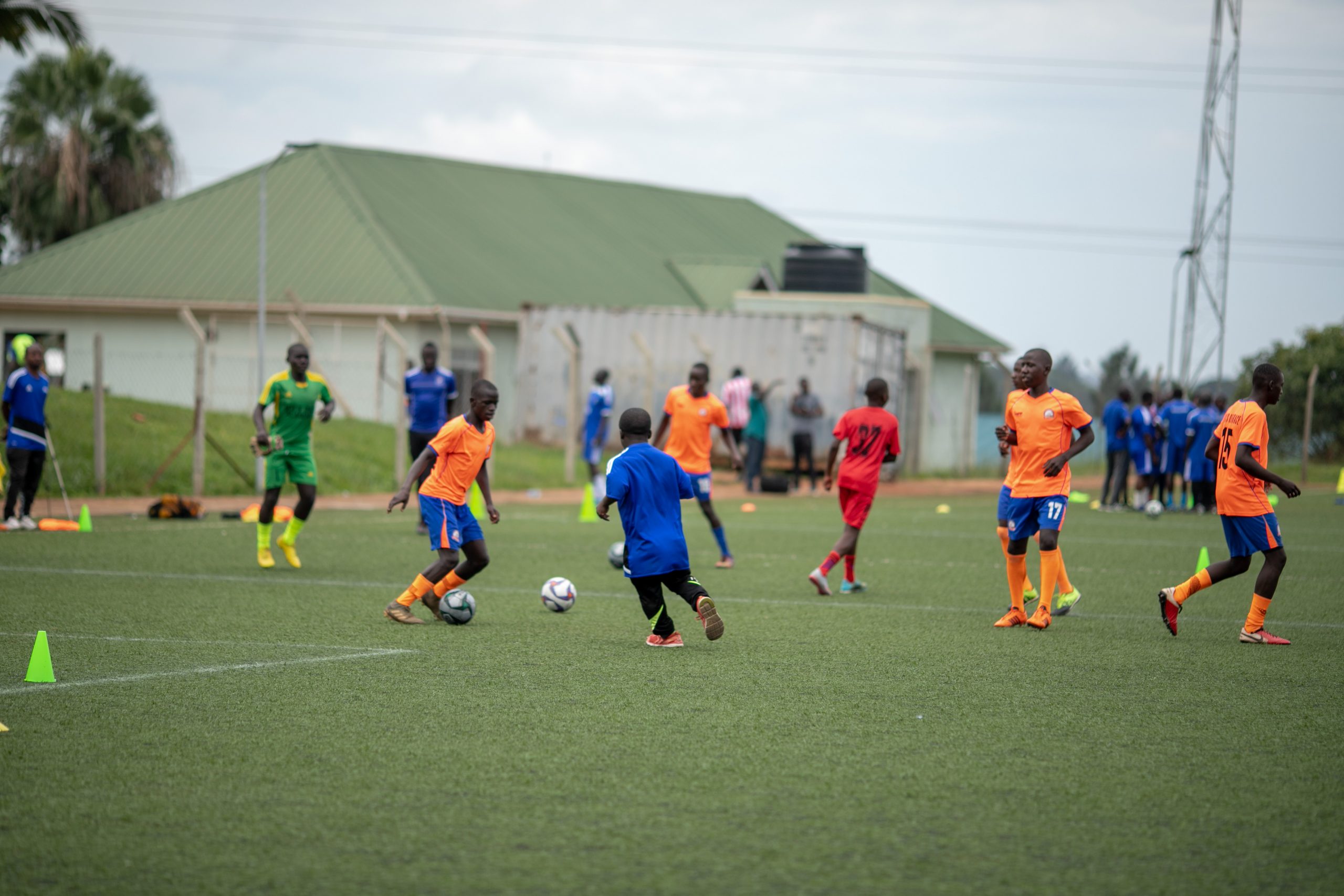 The closing week of the program ended with gathering feedback from all stakeholders while the coaches received certificates of completion.

“For us coaches, coming together gives us perspective to reflect on where we are lacking in Uganda as a footballing nation.” Said one of the coaches when asked about the importance of the program.

To some coaches, this program came at a critical time for Ugandan football. “I have a special interest in youth football, and I think this course is very timely because I want to know why our players cannot play on the international market, partly I have gotten the answer from this course.”

Speaking on the impact, Ernesto was ecstatic and happy to see the coaches apply their learnings, “I am happy that we get to touch people’s lives positively, I hope those people then go on to touch other lives so it creates a scalable positive impact.” 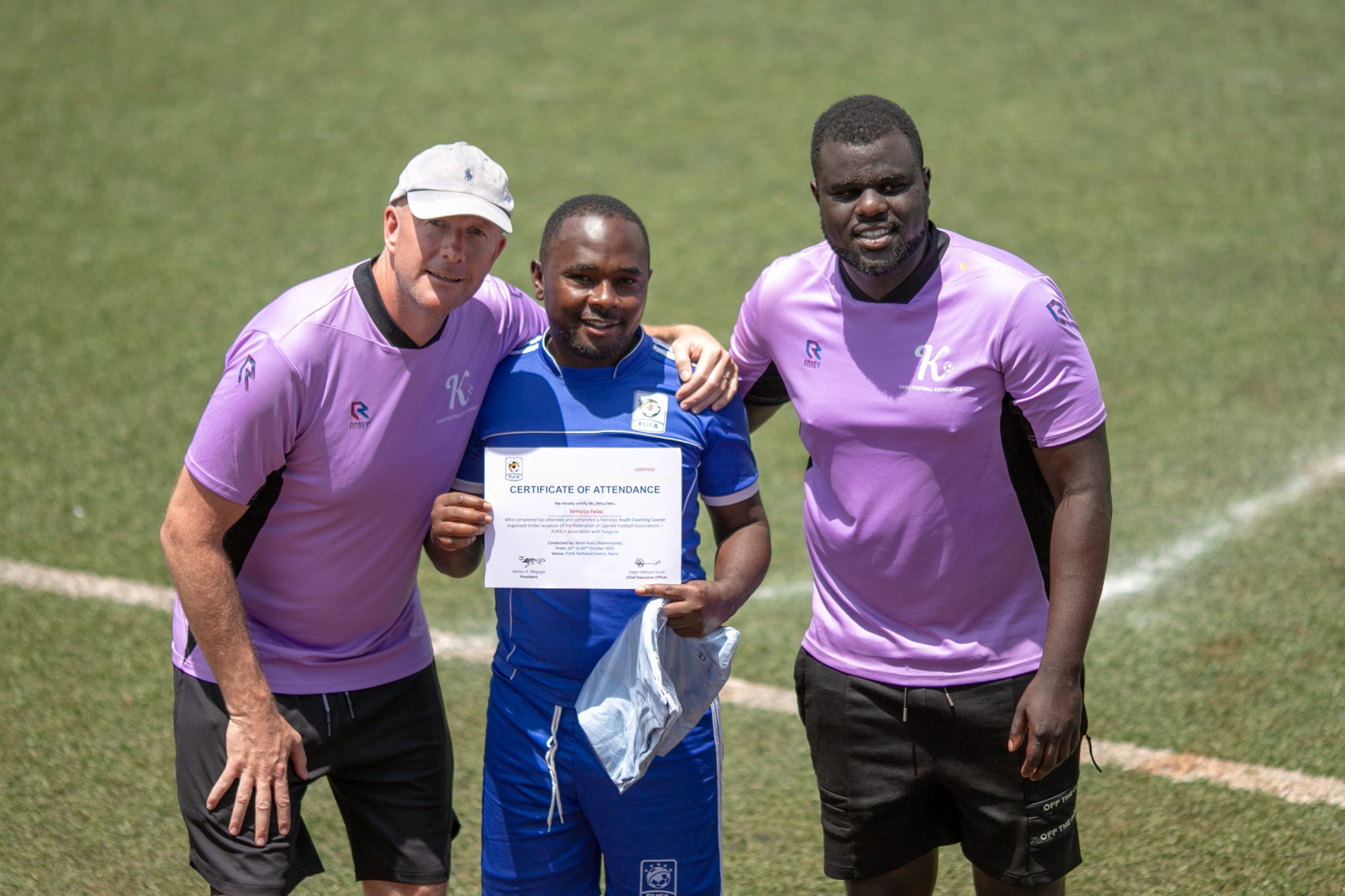 Ernesto and Kevin handing out a certificate of completion

The key to talent development in Africa

Ernesto then realized that the challenges we have at Tunga with software developers are the same that we see on the football pitch. It’s one thing to be able to write code. But it requires much more to be part of an international software development team. That’s why we focus much of our training efforts for software talent on soft skills like teamwork, problem-solving, communication, adaptability, critical thinking and time management.

“In retrospection, I realize that football is a fantastic vehicle for youngsters in Africa to learn these soft skills,” Ernesto contemplated. “If you invest in football talent development, only a small percentage will reach the top. But the others, in the process, will have learned many valuable soft skills that will make them greatly attractive to employers.”

Going back to the insight that children love to learn through play, this training course tastes like more for Tunga. By training football coaches, we can create a ripple effect in which we can teach as many youngsters as possible about essential life skills through the beautiful game of football! 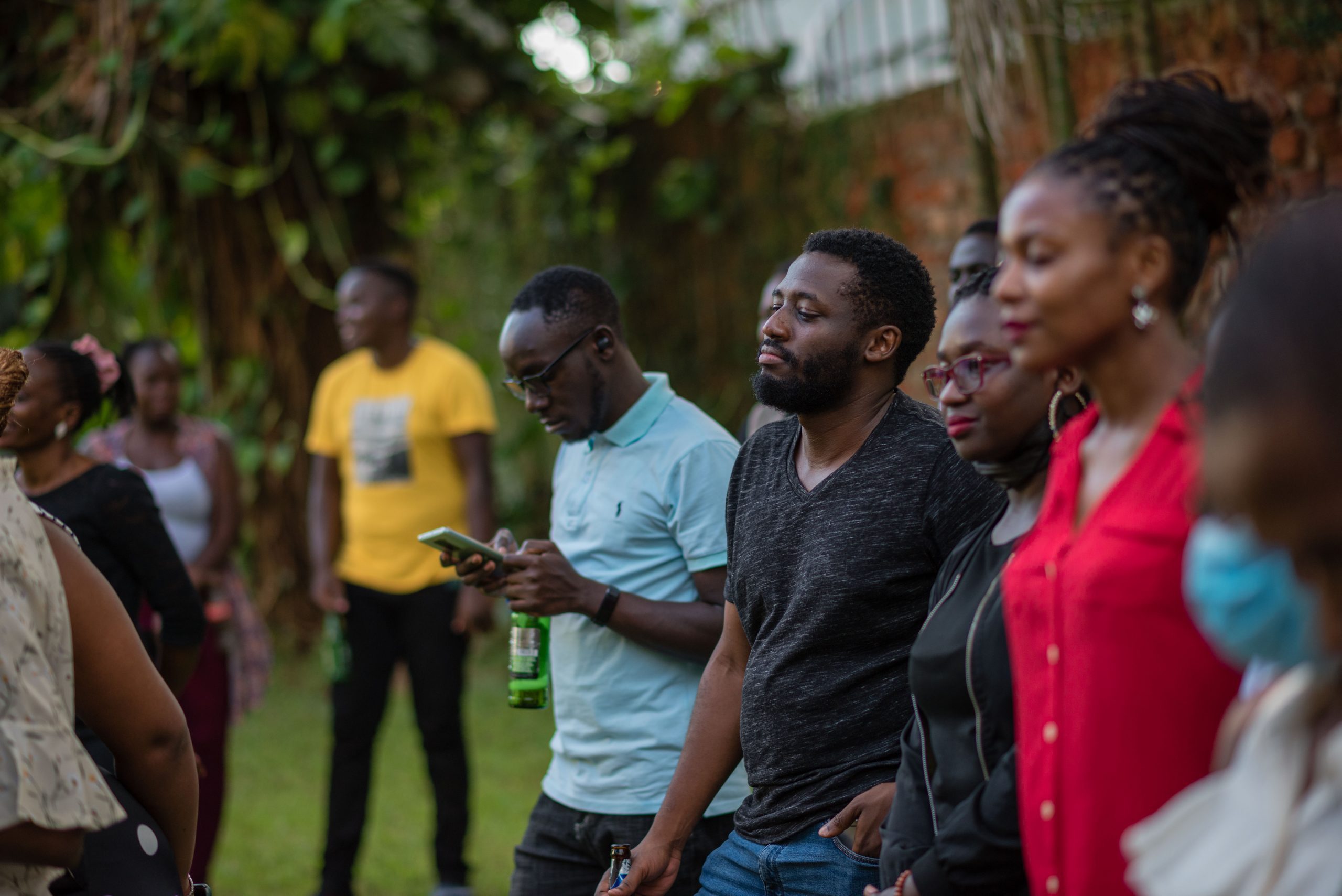 Chilling with the big boys: A remote software developer shares his experiences as a Tunga coder

On the left side of my Zoom screen, a bespectacled Mark Akampurira – a full stack software developer of four years – sits against the backdrop of white walls. He first smiles brightly and then laughs. “Do you mean working for Tunga or in general,” the 26-year-old replies, sounding amused as he leans forward in […] 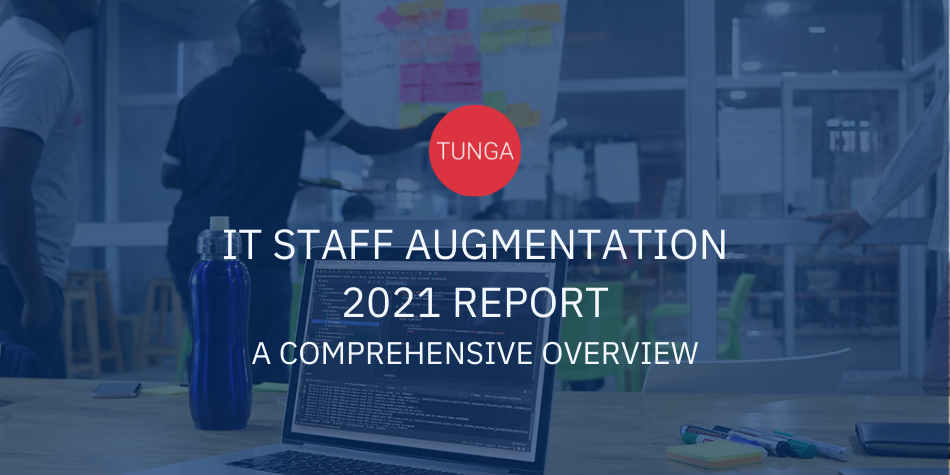 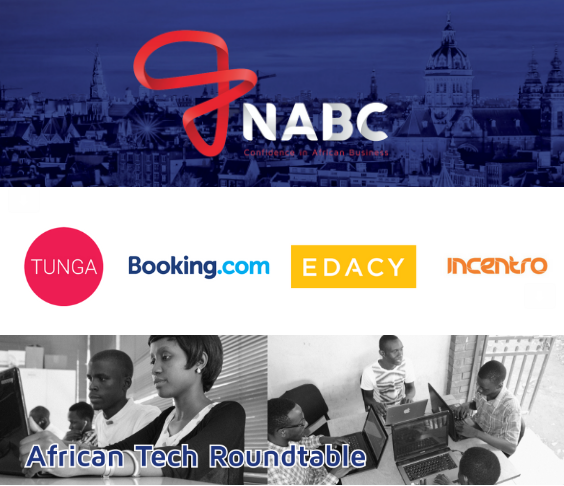