Developer salaries in Africa in 2022 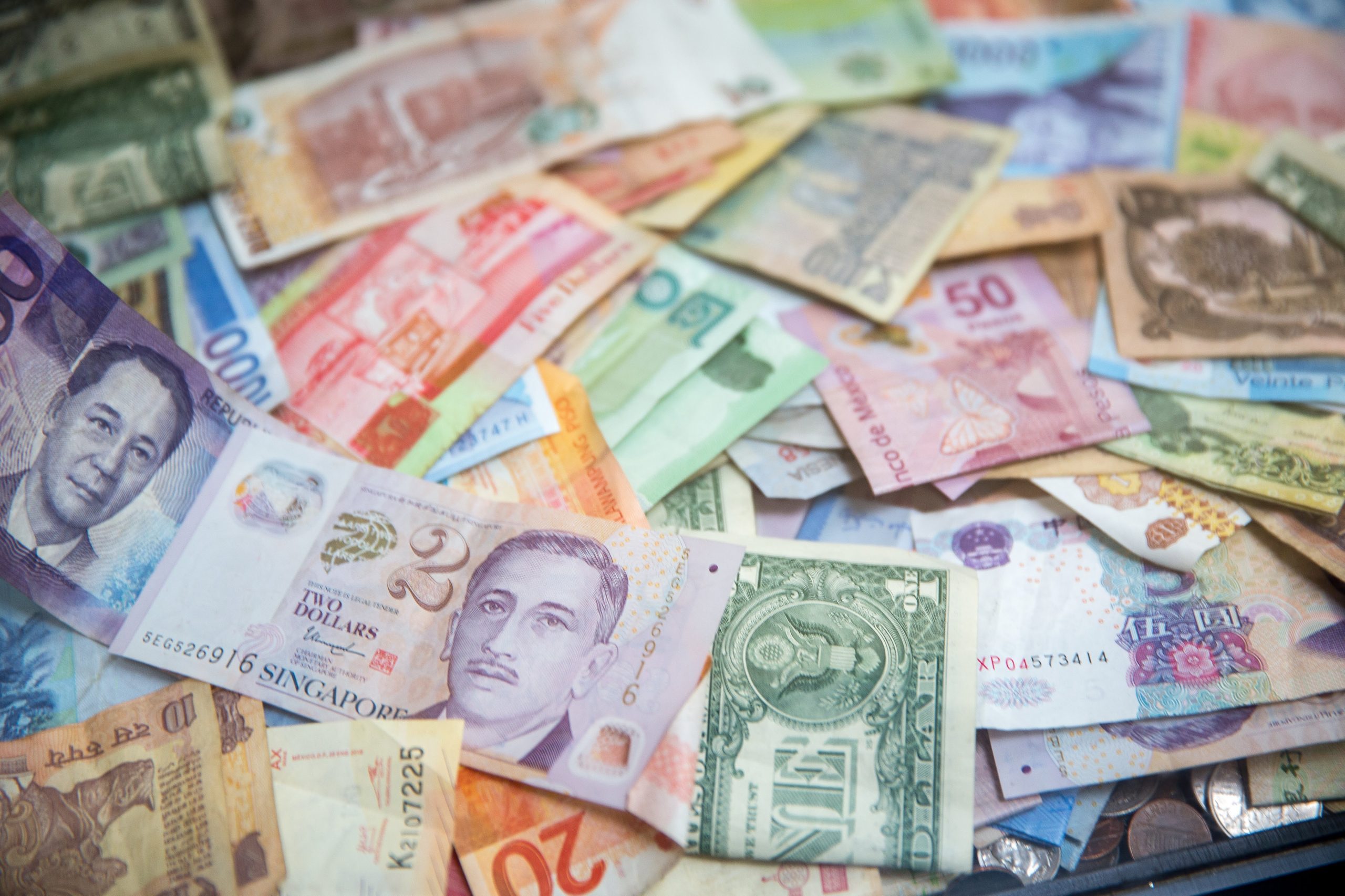 Previously, the Tunga blog featured an article about the best African countries to source developers. For our clients, remuneration is only part of that picture. They are also interested in a country’s tech ecosystem, its general business climate, English proficiency, and so on. All of that info – and more – can be found behind the above link. But let’s be honest – for the individual coder, money matters. Obviously! So we decided to delve deeper into the salary levels for African developers.

It doesn’t matter if you’re just starting out as a coder, or are already well-established. You should have a good idea about what a reasonable salary is for your trade in the country where you live. We want to give you that, and more. We also adjusted the average and high-end developer salaries in your country for the local cost of living. And by doing that for African countries north to south and east to west, you also get a good picture of which countries are the most interesting to work as a developer – purely from a financial point of view, of course.

So how much do African coders make?

OK, OK, of course you’re keen to know in what African country developers make the most dough. Well, it won’t come as a surprise that South Africa takes the cake with an average salary of €1,911/month. This amount is almost double that of our #2 and reflects the relatively advanced economy of SA. As shown in Figure 1, Moroccan coders are the second highest earners (€1,018), followed by the Kenyans (€788). Nigeria (€586) and Uganda (€568) – home to quite a few Tunga devs – are halfway down the table, with Ethiopia all the way at the bottom (€194). 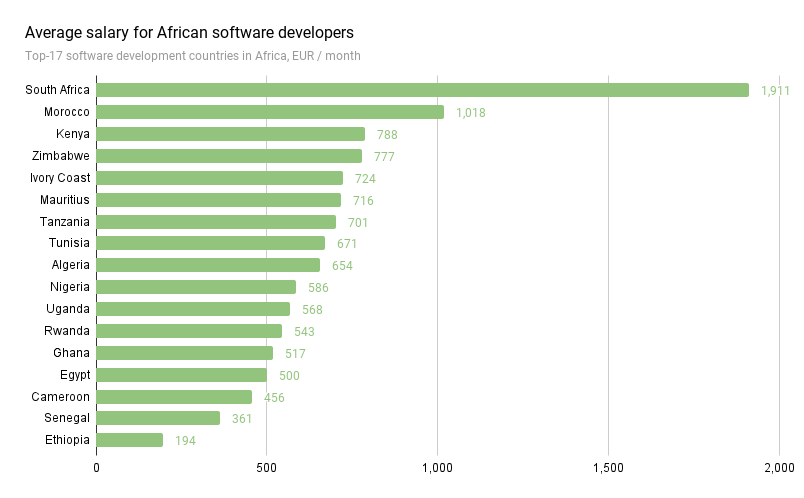 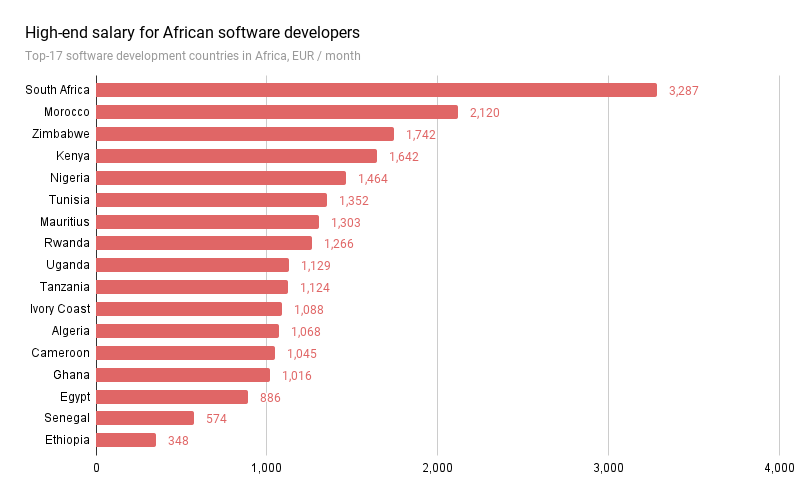 At €3,287, the biggest earners in SA make 1.7 times the average for that country. That difference between the average salaries and the highs – in the language of statistics: the spread – varies significantly between our 17 countries. The spread in Nigeria is remarkable: Nigerian coders with the biggest paychecks earn 2.5 times the national average! Check Table 1 for more details.

We can’t be sure why this spread in salary levels is as large as it is in some countries, but we have a few hypotheses:

So should all African developers now rush to book their ticket to South Africa? Not just yet. After all, earning buckets of coin means nothing if you’re forking it all over for your rent at the start of the month. That is why we took a good look at the cost of living in the same 17 countries.

We decided on South Africa as the benchmark for our comparison of the cost of living (see the paragraphs on methodology at the end of the article). Table 2 shows you that Senegal leads with 1.18. This means that the cost of living in Senegal is 1.18 times higher than in South Africa. Note that Ethiopia – the country with the lowest developer salaries, remember! – takes third place. We’re not sure, but the country’s recent history of political unrest might explain the high cost of living. Overall, it is fair to say that, judging by Figure 1 and Table 2, developer salaries are not always directly related to the actual in-country cost of living.

Given that many developers flock to the capital to enjoy the amenities there, we did not stop at the national level. We used Johannesburg as a benchmark to make comparisons easy. Table 3 teaches us that the cost of living in Lagos is the highest of all capitals. This is especially striking, as (as shown in Table 2) life in Nigeria overall is cheaper than in South Africa. But Table 3 indicates that Lagos-based coders pay 1.26 times more for their expenses than they would in Joburg. Time to move?

Table 3: Cost of living (including rent) indexed for the capitals of the top 17 software development countries in Africa; index benchmark: Johannesburg (source: Numbeo)

Of course, life in the capital city is more expensive in many countries. Hey, whether you’re in Lagos or London, Nairobi or New York, living in luxury with the happening crowd comes at a price! For our 17 capitals, the Lagos-based developers are relatively the worst off. But Table 4 also shows that in a few countries, life in the province is barely cheaper than that in the capital.

Table 4: In-country ratio for the cost of living for the top 17 software development countries in Africa; average national cost of living compared to that of life in the capital (source: Numbeo)

Table 4 also confirms the huge in-country spread for Nigeria/Lagos. In general, it may be more worthwhile for developers and teams to move to less urban areas – provided they have good internet access and other facilities.

Putting two and two together

Now we have the necessary information to adjust salaries for the cost of living. We calculate this, by dividing the salary level by the index score. Remember that our index was benchmarked on South Africa. Morocco’s adjusted salary of €1,384 in Figure 3 by itself is meaningless. The number should be interpreted as the salary the developer would earn if they were based in South Africa (also compare the salaries for South Africa in Figure 1 and Figure 3, which are the same). By performing this calculation for all of our 17 countries, we get an idea of how attractive a country is for a developer to work in, relative to the other countries. 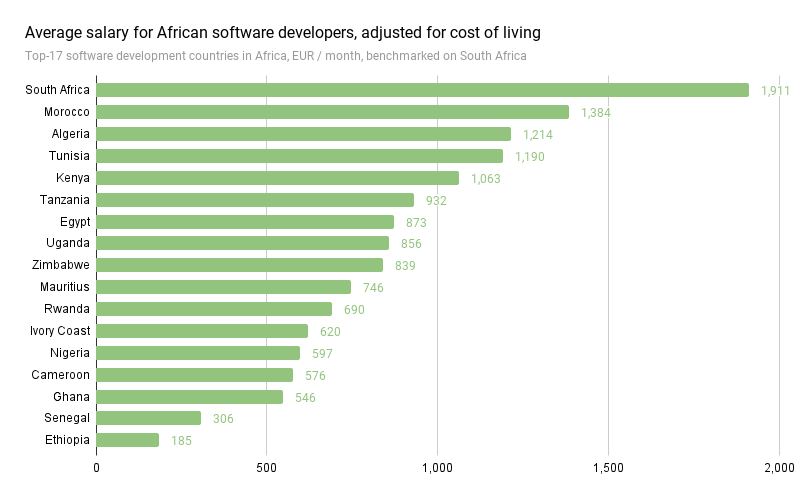 With this information in hand, we have a better understanding of the purchasing power of African developers. Figure 4 shows that, with the exception of Egypt, our North African countries are the most attractive for developers. This is the result of relatively high salaries and a low cost of living. Next come East African nations (including Egypt). The least attractive countries for coders are in West Africa, but Ethiopia is all the way at the bottom. 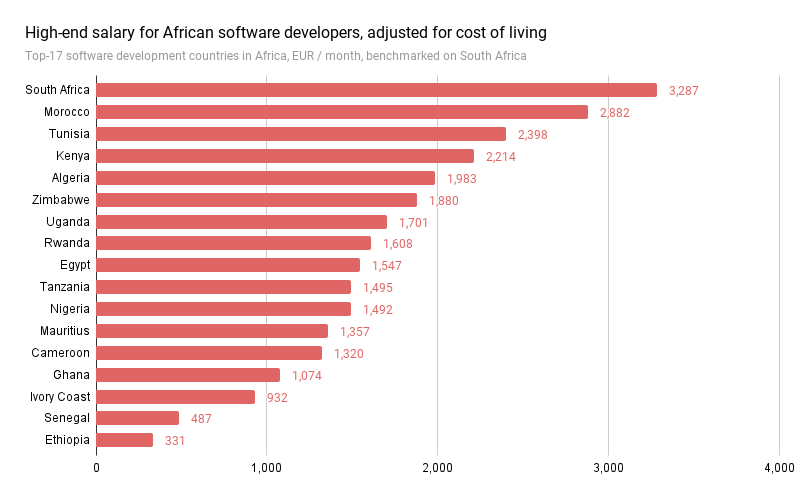 So how is that for the high earners? We see roughly the same picture, but high-flying Algeria–based coders may want to consider a move to Morocco or Tunisia, while their peers in Tanzania could pop across the border to Kenya.

To make the picture complete, we created a plot diagram that shows the most attractive countries for high-end developers. Figure 5 gives the overview, with the red line being an average. 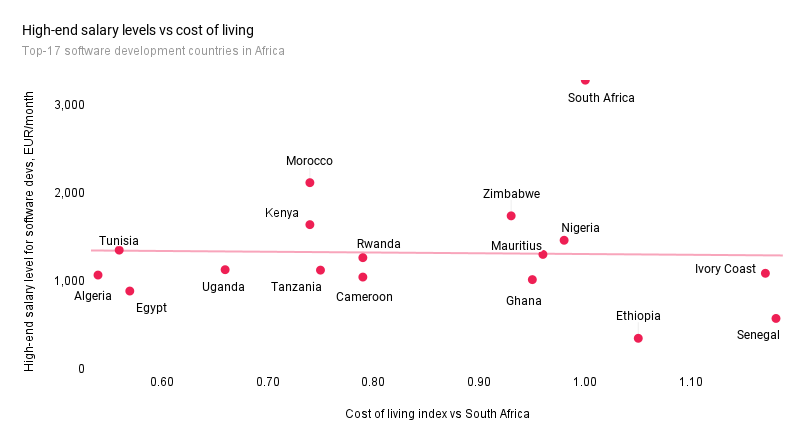 Figure 5: High-end salary levels vs cost of living for the top 17 software development countries in Africa

The countries on the bottom right (Ethiopia, Senegal and Ivory Coast) are the least attractive, due to a high cost of living and low salaries. The prime locations are found top left: Morocco and Kenya. While the cost of living in South Africa is high, we can safely say that expenses are offset by the high salaries. The reverse seems true for Algeria, Tunisia, Egypt and Uganda. There, the cost of living is so low that it compensates significantly for the relatively lower salary level.

Of course, people don’t just pack up and leave only for money. The local people, nature, culture, quality of life and many other factors weigh into that decision as well. And as a developer, you need a good tech environment too. Having said that, at Tunga we like a bit of adventure – or we would not be where we are now! So if you’re an African dev looking to earn more, you now know where to start looking. Good luck with the relocation!

For our article, we focused on the 17 best African countries to source developers. We used a wide range of publicly available sources for our research, which were subsequently cross-checked. Our data was sourced from Glassdoor, Paylab, Payscale, Salary Explorer, Average Salary Survey, TechJaja and Mywage. We uncovered the average salaries, the highs and the spread. For our blog, we decided not to focus on the pay on the lower end, as these salaries are generally paid for junior and below junior positions. Since our developers and our clients are mainly interested in medium level and upwards, we felt we could safely leave that info out.

Next, we found data on the cost of living in the various countries on Numbeo. This site uses a ‘basket’ of expenses (consumer goods prices for things like groceries, restaurants, transportation, rent and utilities) to compare costs in various locations. Yes, we realize that the consumption pattern will differ from location to location (let alone from continent to continent!), but this is the best available tool we found.

Numbeo then indexes the scores, with New York City as a benchmark. We felt it was more appropriate to use an African country for our comparison, and decided to go for South Africa – based on the fact that SA has the highest salaries. This means that the indexed results by themselves are fairly meaningless. These indexed outcomes must always be interpreted as in comparison to living in South Africa. For example, if the cost of living in Senegal is 1.18 (Table 10, this means that a Senegalese developer pays 1.18 times more for his shopping than he would pay for the same products and services in South Africa.

A note on the results

The height of the salaries depends on many factors, such as skills level, experience, local market circumstances, and so on. Also bear in mind that the numbers published on the sites are often based on self-reported data. And while the stats cover the majority of the developers out there, there are – of course! – exceptions. In theory, there is no limit to how much an African senior developer can earn with remote work on the international market. In general though, coders making more than the high end can be considered outliers.